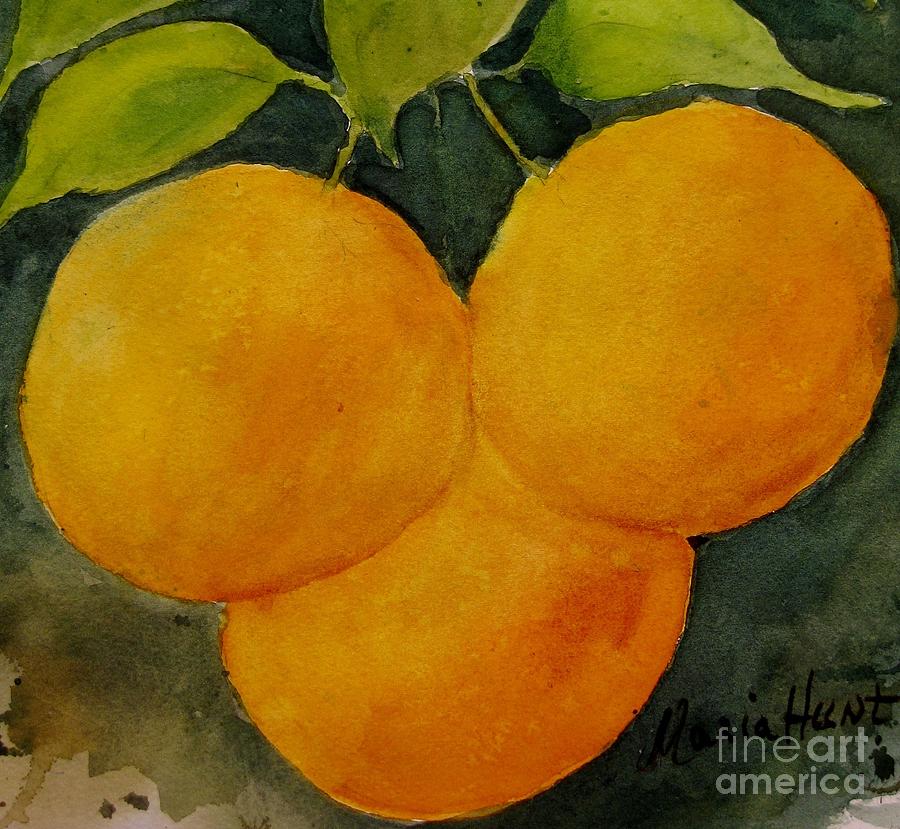 This original painting is currently for sale.   At the present time, originals are not offered for sale through the Maria Hunt - Website secure checkout system.   Please contact the artist directly to inquire about purchasing this original.

In the Shade of the tree, three grapefruit drew their last drink from Mother Earth. Some artist picked the low-hanging fruit to get a closer view of the leaves and subtle coloring. . So in memoriam, the following gives facts about our three newly-deceased grapefruit.

The grapefruit, not even 300 years old, is just a kid in the world of fruits. The offspring of the pummelo, sometimes spelled pomelo, the grapefruit may have appeared as a horticultural accident during the 1700s in Jamaica.

As for the United States, in 1885, Florida's first shipment of grapefruits to New York and Philadelphia created a flurry of interest in the fruit and was the beginning of a serious commercial grapefruit industry.

1948 citrus horticulturists began to examine the grapefruit's botanical origins and concluded it was not a sport of the pummelo but a hybrid between the pummelo and the orange that occurred accidentally. The grapefruit now has the scientific name Citrus X paradisi.

Lastly,every part of the grapefruit is recognized for its many health benefits. Grapefruit seed extract, available in health food stores, is commonly used as an anti-fungal remedy, an infusion prepared from grapefruit flower blossoms becomes a treatment for insomnia. & is also valued as a cardiac tonic.

Grapefruit stimulates the digestive tract and aids in relieving indigestion and gas. The fruit also has diuretic properties helpful to people with water retention and liver and gall bladder conditions.

Rubbed on the skin, grapefruit is beneficial in treating acne and oily skin.

Special THANKS to the following Fine Art America groups for featuring this painting... Such an honor :

I love your grapefruit three! glorious!

Thank you, Kaye Menner, for making this a favorite.

Kristin, I so thank you for your visit and comment.

Thank you, Viktor... So appreciate your kind words.

Tami, thank you for your visit and kind comment.

Maria, it should say Congratulations below :)

ONGRATULATIONS! Your beautiful art work is featured on the home page of LADIES CLUB. LF. You are welcome to archive your image in the Featured Images thread.

I so thank your for visiting and commenting. I just love this group of Grapefruit hanging over the wall. I have improved it but have not uploaded the updated painting.. I am just honored hen you visit.

Thank you Wes and Laurie.... So appreciate your kind visit... I have improved the edges of the grapefruits but haven't uploaded it yet.

Thank you so much, Hazel.

Great texture you achieved on this wonderful grapefruit painting, Maria! Just seeing them makes my mouth start watering because I just love to eat grapefruits! L/F

It is an honor to have this painting featured in the Art District Group. Thank you, Pamela Williams

It is an honor,, Michael Mirijan Thank you

This wonderful picture is featured on the homepage of the "Pictures for Present" group.

Thank you, John. So appreciate your delightful comment.. and promotion : ))