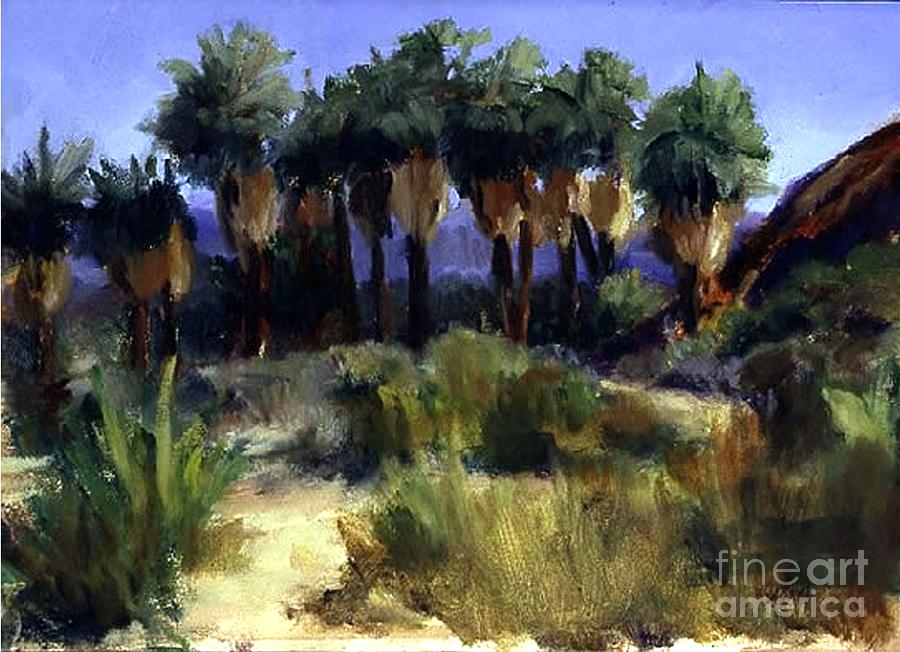 This is Home Thousand Palms Preserve

This is Home Thousand Palms Preserve

This 11x14 was sold at a fund raiser for Dyslexia Foundation.. the 2nd fundraising event that convinced me that art could make a difference in even the smallest communities.

In chilly air, we set up our easels and began painting the early light in the Thousand Palms Preserve, outside Palm Springs, in the desert. The light wasn't intense in the cloudless sky, but the stately palms were glimmering, the walking paths glowing slightly, and the distant mountains took on the cool morning desert colors.

This is life in the desert floor, outside Palm Springs. It also is home to the almost extinct a small 3 toed lizard. It does have one of the last "moving" dunes that will soon overtake the natural spring oasis... It is being held back by a stand of palms... beautiful and stately... being "hugged" or "nudged" by the moving sand dunes. Enjoy this moment... and step on the actual fault line as this portion of the desert moves closer to San Francisco Bay Area. : ))
After a few hours, the light had changed, and we left for another location in the shade. At home, I created a larger (24" X 48") version of this painting

A special THANK YOU to the following Fine Art America groups for featuring this painting:

Maria, a marvelous painting with excellent composition and color! Jerome

You've expressed the light and brilliance of the atmosphere with an economy of brushstrokes making a wonderful statement, Maria - L/F!

Thank you so much, Johanna I so appreciate this.

Hi Sherri... thank you for such a sweet comment... I have to say that, come November, we live in paradise... It is a very early painting of mine that I felt blessed that I could create something that resembled the "original" work by God. : ))

Hi Maria, how very lovely.. Thousand Palms is not to far from my home ..beautiful!!..fl Sherri.... have a nice week

Michele, thank you for featuring this painting in Philanthropic Artists

Danielle, Thank you for your kind visit... and hiking in this preserve.

I've been hiking here! It seems like a mystical place. Thank you for sharing your beautiful painting of it!!

Debra, this is one of my earlier works... Not sure how it turned out as well as it did... happy things happen.

Oh the colors are wonderful as is the composition. What a beautiful art work. L/F

Thank you, Genevieve. I appreciate your visit and comment

Love this exciting painting Maria. Wo beautifully expressed with your brush! v/f

Lois... I sooooooooooooooooo thank you.... Your work just makes my heart smile... I appreciate your comment : )))

Magnificent, Maria. This came by my twitter feed just now and I had to come visit. Love the way the light is hitting that lighter-colored center part of the trees. Lovely!!!! l/f

Karyn, Thank you for making this a favorite.

I am so appreciative of you comment. This was such an early work in my painting career. It had to be God moving my hand : ))

How kind, Angeles. Thank you so much for your comment. I am honored.

Outstanding painting, Maria!! The powerful style and the handling of the light are just perfect. L/F