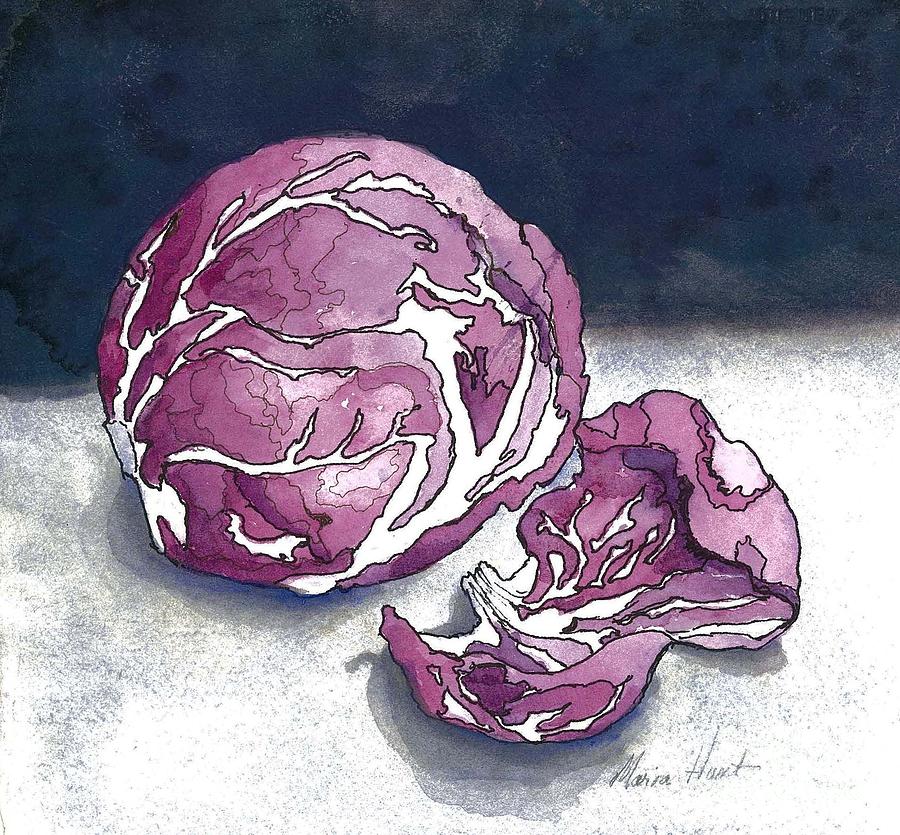 This original painting is currently for sale.   At the present time, originals are not offered for sale through the Maria Hunt - Website secure checkout system.   Please contact the artist directly to inquire about purchasing this original.

This Radicchio is one of the 300 "row crops" grown in Coachella Valley, one of the main agricultural producer bases in the world because of its year-round growing seasons. This was one of the subjects in a "Farming In the Desert" solo exhibit at the City of Palm Desert. This painting was just an ordinary vegetable but pen and ink gave it a bit of grace and elegance.

Still, the original painting seemed to be lacking ... something. I decided to change the background to a deep indigo. It reads as black or indigo depending on the lighting. I left the original image on Fine Art America but only available as a print.

As to Radicchio, it contains intybin, a sedative/analgesic, as well as a type of flavonoid called anthocyanin which is used for making dye-sensitized solar cells.

An interesting partnership began about 10 years ago when a brilliant woman, Christy Porter, began Hidden Harvest, a non-profit organization, worked with local growers to pay their unemployed migrant workers to glean the fields that had already been harvested. In the first few years, the organization "rescued" a million pounds of fruits and vegetables that would have rotted in the field; Those vegetables, collected by those migrant workers, were used to to feed the hungry, via local distribution systems and outlets. Beautiful vegetables, like this locally grown Radicchio, feed the financially challenged elderly, and those who lack the resources to provide fresh, healthy food. More recently, the number of pounds of rescued fruits and vegetables has soared above 10 million.


A special thanks to the following Fine Art America Groups for featuring this painting.

You succeeded in creating a painting with grace of a mundane subject, Maria. Love it. f/l

Oh, how I love the line work in this painting, capturing nature's handiwork in action. like/f

Maria, thank you so much for the kind comment on this painting. I love this version, : ))

I love where you left the white alone on the leaves.

Laurie, Thank you for your kind visit and comment

Kaye Menner, thank you for making this a favorite

Dominique, I thank you for making this a favorite... : )

Thank you, Lori.. I appreciate all you do to promote so many artists. It is an honor to be featured.

Congratulations on your feature in Mixed Media art

Thank you, Hazel. much appreciated.

Thank you, Hazel. much appreciated.

Maria I love your amazing artistry and the way you have made this veggie so elegant, my friend! L/f

Thank you, Jolante.. I so appreciate your visit.... AND your art. Warmest regards from the California desert Maria

This is wonderful Maria! I love the description and history. My parents lived near there in Holtville, outside of El Centro and loved the agriculture there.